"DCIS" stands for "ductal carcinoma in situ." "Ductal" means it is contained within the milk ducts of the breast. The word "carcinoma" indicates that under the microscope, the cells look like cancer. The final part of the DCIS acronym, "in situ," signals that these cells are contained (situated) inside the milk ducts in the breast. 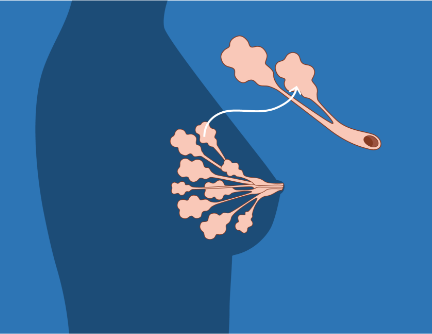 Is DCIS cancer or not?

One of the reasons there is so much debate about what to call DCIS is that the words "cancer" and "carcinoma" provoke such strong emotional reactions. Many people's first response to a diagnosis of any type of "cancer" is to want to remove or destroy it as quickly as possible. However, many years of research have shown that cancer is not a single entity or type; some do not grow rapidly, or even at all. 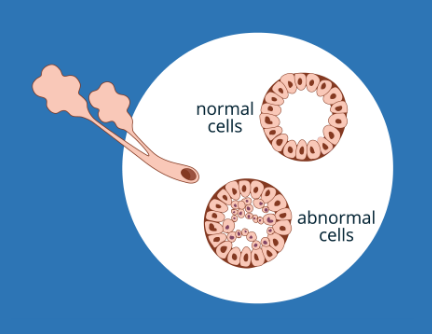 Cells labelled as "cancerous" when examined under a microscope can show behaviors in the body that range from rapidly invasive at one end of the spectrum to very slow-growing and confined at the other. While doctors agree that cancerous cells which show invasion into the breast under the microscope need to be removed by surgery or destroyed by radiation or other therapies, there is much more debate and disagreement about what to do with cancerous cells that are contained, such as DCIS, in the milk ducts of the breast.

What is low-risk DCIS?

There are different "grades" of DCIS. The grade is determined by a pathologist (a physician who specializes in studying tissue) who looks at the appearance of the cells under a microscope.

A level of "risk" is often added to describe DCIS. DCIS can be categorized as "low" or "high" risk to indicate the probability (likelihood) that it will develop into invasive cancer. Women with low-risk DCIS are less likely to have invasive cancer in the future than women with high-risk DCIS. While low-risk DCIS has features that indicate a woman has a low probability of developing invasive cancer, this is not the same as no risk. These risk levels are also a source of debate.

How is DCIS discovered and diagnosed?

DCIS is most often found by mammograms in women who have no breast lumps or other symptoms. Micro-calcifications (tiny bits of calcium that appear as white dots on a mammogram) indicate the possible presence of DCIS. 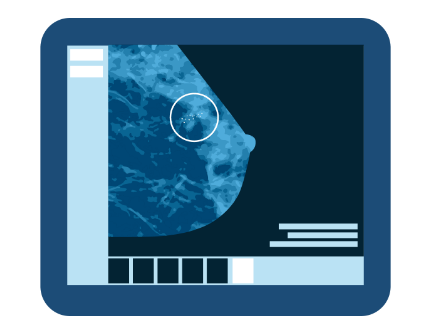 About 10% of women with DCIS are diagnosed because of symptoms such as nipple discharge, a breast lump, or skin changes. Patients with DCIS associated with symptoms are thought to be at higher risk of poor outcomes if not treated.

MRIs use radio waves and a magnet to create detailed pictures of the inside of the body. This can highlight tissue that does not appear to be normal. MRI is not routinely used to screen for DCIS. However, it can be used if irregular spots are found on a mammogram. An MRI can provide information about how much DCIS exists. An MRI is also used to help decide what kind of surgery may be needed (if any).

While most DCIS is usually found on a mammogram (or in some cases when there are physical symptoms), other types of testing may be carried out to learn more about the condition or if there are specific indications that they are needed.

Ultrasound uses high frequency sound waves to produce detailed computer images of the inside of the breast. Ultrasound may be used to look at breast changes that can be felt but not seen on a mammogram, or if more information is needed about a change that may have been seen on a mammogram.

A breast ultrasound is painless and does not use radiation. However, at this time, ultrasound is not routinely used alone for screening or monitoring purposes, because it is not capable of imaging the more common types of DCIS – those that have micro-calcifications - or picking up important changes in the calcifications over time.

A breast ultrasound may be useful for:

However, mammograms and other imaging methods cannot diagnose DCIS. A needle or surgical biopsy is currently the only way a woman can be diagnosed with DCIS.

All of the imaging methods described here are used to screen for possible atypical cells. Women with findings on any of the examinations above will likely be referred for a biopsy. This is where a small amount of breast tissue is removed to check for cancer or other abnormalities. If DCIS is found, a pathologist measures the cells under a microscope to see if (and how) it is growing. The biopsy is used to provide important information and confirm a diagnosis.

There are two common types of breast biopsy. A core needle biopsy is where tissue is removed from a suspicious area of the breast with a needle. The core biopsy can either be directed with mammograms (stereotactic biopsy) or ultrasound (ultrasound-guided biopsy). This helps to identify any potential areas of concern. A further biopsy may be necessary if the core biopsy is not able to remove cells to give clear and definite results. If DCIS is diagnosed (or still suspected), a wider area of tissue may need to be removed. This is known as a surgical biopsy. It may also be called "wide local excision" or a "lumpectomy."

What is a pathology report?

A pathology report is a description of the tissue taken in the biopsy. Pathology reports are important. Recommendations about treatment options are based upon it. Sometimes a second pathology opinion may be requested. It is a good idea to take a copy of your report if you go to any further consultations. This is the place where the grade of DCIS is listed. For more information about DCIS grades, please see above What is low-risk DCIS?

Your pathology report should also include the results of a hormone test for estrogen receptors (ER) and progesterone receptors (PR). These receptors make the DCIS cells sensitive to estrogen and progesterone hormones. If the receptors are present in these cells, they may be termed ER/PR positive (or ER/PR negative if they are not). These results help you and your doctor decide whether your DCIS is likely to respond to endocrine (hormone-blocking) therapy.

The pathology report will also describe the margin. A margin is a small amount of tissue around the DCIS. If it is healthy with no evidence of DCIS, it is called a clear or clean margin. If some DCIS is found at the edge of this tissue, it is known as a positive margin and is a signal that there is likely more DCIS in the breast. Another surgery called a re-excision is then necessary to obtain a clear margin. The goal of getting clear or clean margins is to try and reduce the chances of any microscopic DCIS being left behind in that part of the breast. It is not unusual to undergo further surgeries to achieve clean margins

In a small percentage of low-risk DCIS, cells are found outside the breast duct. This is called invasive cancer. If the number of cells is small or they have not invaded far, it may be called "micro-invasion." If invasion is present, it is called "upstaging." It is no longer considered DCIS, it is invasive breast cancer, and is treated as such.

Was this information helpful?